Staff mobility in the Erasmus+ Program: Israeli researcher at FAU 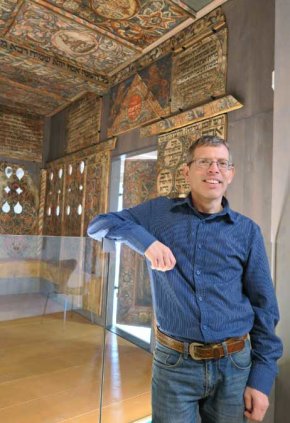 Dr. Zvi Orgad is an Assistant Lecturer in the Department of Jewish Art at Bar-Ilan University, where he completed his PhD studies. His thesis focused on the work methods of Eliezer-Zusman from Brody, Poland, a synagogue painter who worked in Franconia, Germany, in the early modern period.

Dr. Orgad has authored articles on synagogue art and was a researcher in the Israeli-German project, “The Torah Ark in German Lands.” His main research topics include synagogue interior paintings and the work methods of synagogue painters and manuscript illuminators in the middle ages and early modern period.

Most recently, in the summer of 2019, he took four graduate students to Germany as part of an Erasmus+ collaboration with the University of Erlangen-Nuremberg (Friedrich-Alexander-Universität Erlangen-Nürnberg or FAU), Germany. His first time with Erasmus+ was during his postgraduate studies when he received an Erasmus-Mondos scholarship, which enabled him to spend six months at the University of Graz in Austria.
He is originally from Bnei-Brak in Israel, but now lives in Ashkelon. 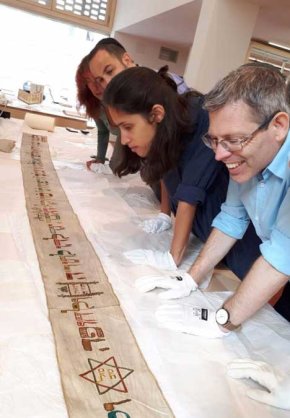 One of the most enjoyable experiences was the encounter with original wimpels (linen sashes used as a binding for the Hebrew Bible/Torah) from the early modern period. For most students, this was the first unmediated encounter with the local material culture of this kind. The students assisted in deciphering the Hebrew inscriptions and cataloging the wimpels. Handling the original materials was exciting, and the ability to help our hosts contributed greatly to our relationships with them. (See photo on right. The group looking at an original wimpel. Top to bottom: Dr. Maria Stürzbecher, Dr. Leor Jacobi, Mariann Farkas, and Dr. Zvi Orgad at Jüdisches Museum Franken.)

The most significant aspect of the trip was meeting Franconian Jewish art in its natural environment. Such an encounter deepened the understanding of the conditions under which Jews lived in this area. Another advantage was the collaboration with local historians specializing in general and Jewish history. This meeting provided answers to specific questions rarely dealt with in general historical literature.
The seminar was the first of its kind to be held as part of the study program at Bar-Ilan University, and I hope to set an example for other units at the university.

This Erasmus+ experience broadened my horizons and strengthened my personal connections with researchers in similar fields. Experiential learning has influenced the way I teach. In terms of my personal research, the seminar has expanded and deepened my knowledge and allows me a greater understanding of the material I am researching.
Being given the opportunity to expose graduate students to this field of research and being able to strengthen the professional and interpersonal relationships with scholars has been invaluable. 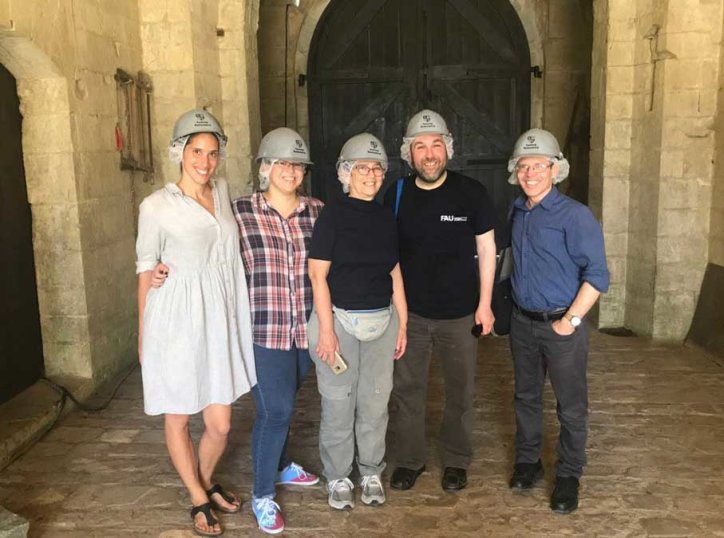 The entire seminar was a powerful and influential experience for all of us. One of the most eye-opening activities in the context of Jewish life in Germany in the past and today was connecting with the Jewish community in Bayreuth. We met the head of the community who told us about the community and its leading members.

I love Europe and feel very comfortable there. During my doctoral studies, I received an Erasmus-Mondos EMAIL II scholarship, which enabled me to spend six months at the University of Graz in Austria. During the periods I stayed in Europe, I made many friends, some in my field of research or related fields, others while working in local museums, and many who had nothing to do with my professional pursuits.

Compared to Israeli culture, European culture is much more restrained and formal. Spending time in Europe has changed the way I behave in Israel in terms of interpersonal and professional relationships.

My initiative of holding a seminar in Germany could not have taken place without the funding and support of Erasmus+ and the dedicated work of the Bar-Ilan and Friedrich-Alexander universities’ international schools, especially Daniel Schuval (BIU) and Bianca Köndgen (FAU). It allowed me to practice my ability to execute innovative projects that contribute to research as well as enhance the cultural and interpersonal connections with institutions and individuals in Europe.